Tis the season for holiday cards, right? Are you looking to take your annual mailing to the next level? Look no further than Stkr.It!

For me, it was one of those “You had me at QR code” moments. But here is what is so great. The application goes so much farther than just a holiday card. Imagine the quilt your grandmother made you also being able to play an audio clip she recorded for you. Or your scrapbook page coming to life with video instead of card stock.

I don’t quite understand how they do it, but it appears easy to use. When you purchase a set, it includes a set number of stickers or fabric squares. The maximum file size is 50 MB or approximately 2 minutes of video. The best part: messages are stored for a lifetime. Prices range $2.99 to $9.99 depending on which set you select.

Do you love this idea too? What will you Stkr? 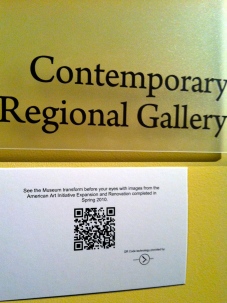 Spotted: Lobby and Galleries inside the Fort Wayne Museum of Art

Scan Result: Each QR code generated a unique result. The lobby sign generated a video and text of the museum’s history. Others gave you additional info on the exhibits and museum.

Review: It might not be what you’d expect at an art museum, however, I think it’s an excellent use of the technology. Whether patrons enjoy the additional content in the museum or spend time with the information after they’ve left, it seems like a good win for both the patron and the museum.

Review: This is one of my favorite maternity brands. Love this dress and love that they’re using a QR code for advertising. The placement of the code is questionable, but given the small size, it doesn’t bother me. Overall, this is a nice basic example of how brands can easily incorporate a QR code into their advertising. Baby steps. (pun intended of course.) 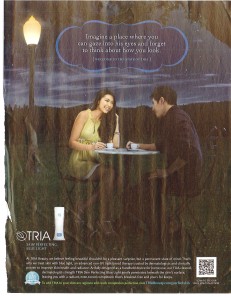 Scan Result: A video that automatically starts with a product demo and testimonials.

Review: Simple placement of the code. For a beauty tool that is a mix of skin care and technology, I like that they’re using the QR code in the advertising. However, this ad is pretty paint-by-numbers. I think I’d be looking for an agency who focuses on mixing great design and innovation just like your product. 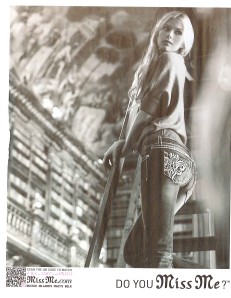 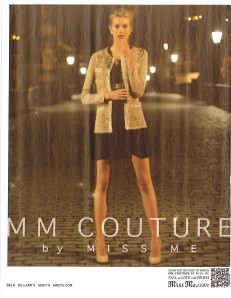 The scan takes you to this website that has several videos. Consider it a fashion series.

Review: The codes are small, but size doesn’t necessarily matter when it comes to scanning codes. I wonder if the Couture audience are scanners… I guess it doesn’t matter in this case because both ads are reaching the same eyes since they’re side-by-side in the magazine. As far as the result, I think it’s an interesting destination. And, I think it works well for the product and the ads.

Scan Result: A listing for the product with details and an informational video as well.

Review: I’m going to review this in two parts. First, let’s start with the ad. I like this headline but after the line “what’s your type?”, they’ve lost me. WAY too much text. And the QR code looks like an after thought. If you’re going to use a QR code, do so with purpose. And be sure your audience knows that you want them to scan it. At this point, I’m not sure what Cuisinart wants me to do beside think that the girl in the photo is perhaps flirtatious.

The highlight of this ad is definitely the scan result. Too often, the scan would just take you to the Cuisinart website. This however takes you right to the product listing and gives great additional info. I actually read the info and was pleasantly surprised to learn this machine has quite a list of features. AND you can use Keurig K-Cups with it. I’d say the ad isn’t doing this machine justice but the QR code is trying hard to make up for it.

Oh the hopes I had for this ad with designer QR code….

Scan Result:    I felt a bit like I was watching the little engine that could while waiting for this scan result. At first, it went to the Macy’s site but then redirected to what says “Fall 2011 Collection”. Unfortunately, the end is this disappointing white screen. Ugh.

Review: Ok, let’s get past the result and just talk about the code. I’m excited to see QR codes go beyond the black and white squares. Kudos to Macy’s for thinking outside the box. Another smart move, using their social media icons to let us know there are many ways to engage with them. 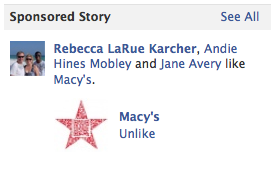 You know what I like even more…after typing this post, I made a quick stop on Facebook and saw this Sponsored Post. How timely! What’s great about it (besides the coincidence)? They’re making the most of the star code and using it as a brand mark. Smart. Wish the result was as smart as the deployment.

The soon-to-be-released book “Brandwashed” has been on my ‘to read’ list ever since hearing of it. So I was very excited to come across this ad for the book using a QR code. At this point though, I’m hoping the book gets better reviews than my mixed-review of the QR code in the ad.

Scan Result: This YouTube video of a baby saying “Macca Macca”, which according to the author means “McDonald’s”. As an aside from a mother of two, I don’t hear it nor would I assume this meant McDonald’s.

Review: I appreciate that the scan went somewhere other than a website. And, I appreciate that it connects to the message in the book. However, I was anticipating some augmented reality because the instructions with the code says “Scan, then place smart phone over baby’s mouth to hear the first words recognized by most kids worldwide.” I can tell you that you can hold the phone anywhere and the video still plays. Combine this bit of disappointment with my overall lack of belief in the meaning of the video and I’d say I’m holding out for better content in the book.

I talk about QR codes fairly regularly, but how many of you have scanned one? Have you ever created one? Why? I’m of the belief that the tool is not successful or a failure, it’s how the tool is used. The same holds true for technology. Whether you’re talking about social media, QR codes, mobile websites or augmented reality, you should always be evaluating and re-evaluating your goals.

I read this article that offers some good advice using real life examples for nonprofits interested in using QR codes. The examples are organized by goals. After reading, I’d love to hear your ideas for QR code use for nonprofits or any other industry.

As read in the Idealist Blog:

Recently at the Social Media for Nonprofits conference in NYC, as Andy Steggles talked about developing mobile strategies for nonprofits, I tweeted: “Is your nonprofit using QR codes? How?”

More ideas, plus a caveat 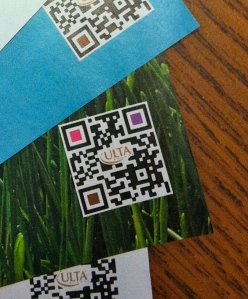 Review: Not a bad result of a scan. The website result was at least mobile friendly. However, I expected a bit more. Considering there were approximately ten ads throughout the magazine AND they used a ‘designer’ QR code, I would’ve expected a bit more. It would have been great if each code scanned went to the product it was placed on. For example, the Philosophy ad QR code could have gone to the product listing on the site. One other item of note, each QR code scanned correctly despite being on a variety of backgrounds, including the blades of grass.